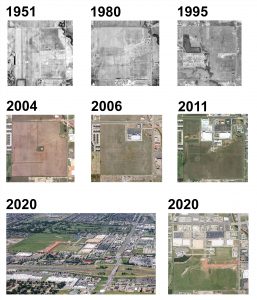 In 1950 Alton and Evelyn Fritts purchased 160 acres in Cleveland County just south and west of Moore, Oklahoma. In short order a well was drilled and two small houses along with a garage, barn, and chicken house were built.

One house became home to Alton, Evelyn, and son, Terry.  Later another son, Scotty, would join the little family.  The other house was occupied by Alton’s parents, John and Letitia Fritts.  The lumber used to build the houses was salvaged from a chicken house the family had owned and operated.  Evelyn often joked “we are living in a chicken house” but she created a warm and loving home in that little house.  A new, much larger stone house was built in 1963 and both the little houses were sold and subsequently moved to a new location.

There were cows and crops and a horse named Babe.  Babe was a beautiful Palomino not easily persuaded to be ridden. Every year there was a large garden and behind the garden was a small orchard with grapes and berries.

A creek passed through the corner of the place and underneath Telephone Road which was dirt (or more accurately red clay) in 1951.  But a small refinery was built to the south and the road was initially graveled and subsequently paved.  Just up from the corner was a huge Cottonwood tree.  East across the road was a tree lined creek and on the north side were more trees and brush that gave way to farm land on the west.  On the south and west were other farms with native grass pastures.

Many in the community owned small farms or were related to those who did farm.  Most community members knew each other and if someone’s cow was out it was not unusual for another neighbor to stop and put it back inside the pasture.
In the 1960′s there was a building boom around Moore and the town annexed the Fritts Farm and surrounding land.  The little town grew up into a small city.

Fritts Farm saw a lot of changes in the ensuing years.  John Fritts died and Letitia Fritts moved to Oklahoma City.  Evelyn and Alton built their dream home.  Terry and Scotty both graduated from high school and college, married and moved away, starting their own families.

There were several opportunities to sell all or part of the land over the years but Alton and Evelyn remained content to live on Fritts Farm.   Mostly the neighboring farms stayed the same as well except for several less-than-successful attempts across the street east.

In 1995 Walmart moved from the east side of I-35 to a much larger facility located on the northeast corner of SW 19th Street and Telephone Road.   Burger King and Sonic both followed not long after.

Terry returned to Fritts Farm in 1998 to help care for his mother.  In 1999 there was a meeting of professionals to discuss the future development of the property.  The consensus was that the land would be eventually developed into a residential subdivision as it was too far from I-35 to have much attraction for retail or commercial users.   But the big news in 1999 was the May 3rd Tornado which eclipsed everything else.