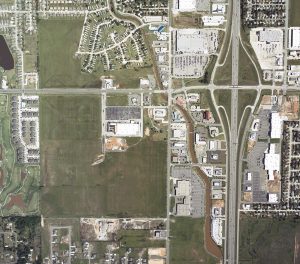 The beginning of the year 2000 was welcomed with considerable concern by many because of the Y2K computer problem.  This had to do with the common practice of only using the last two digits of the year in storing date data in computer memory.  But the year opened with very few of the problems that had been expected.

Meanwhile, Alton, Evelyn, and Terry Fritts had been occupied watching from the back porch of the Fritts farmhouse the construction of a new car wash just east across Telephone Road.   Very soon their attention was turned to a new Hibdon’s Tire store and later to a new Tractor Supply.

Terry asked Stan how much the City was proposing to pay.  Stan replied that the City really didn’t have any money and would really appreciate a gift.  Stan was also very persuasive that Fritts Farm would benefit from having frontage on 4 lane roads.  Eventually a deal was struck to trade the right of way for resurfacing the old driveway of the Fritts’ farmhouse.   The negotiations took place outside and the noise from the new car wash was surprisingly loud which in fact was mentioned by Alton to Stan.

In 2001 Evelyn Fritts died and Alton Fritts was diagnosed with dementia of the Alzheimer’s type.  Prior to Evelyn’s death, she and Alton had asked their sons to not sell any of the Fritts Farm land until after their passing.

In early 2004 several real estate agents visited Fritts farm to inquire about purchasing some or all of the land.  One such agent was interested in a site for a Lowe’s store.   The specific site in mind was about 10 or 15 acres along Telephone Road starting at SW 19th Street.  Lowe’s wanted the store to face east.  Another agent was interested in approximately the same amount of land for a Home Depot store along SW 19th Street but with the store facing north.  This was quite a surprise to the family because any retail interest was very much unexpected.

Eventually a ground lease deal was negotiated with Home Depot that allowed the Fritts’ to retain ownership of the land, thus fulfilling the promise made to Alton and Evelyn and also allowing Alton and Terry to remain living in the family’s home.
Subsequently, Home Depot opened at the end of January 2006,  followed by Starbucks on October 2, 2006, and Chili’s on November 9, 2006.

Also in November of 2006, Fritts Farm received a Letter of Intent from Chick-Fil-A